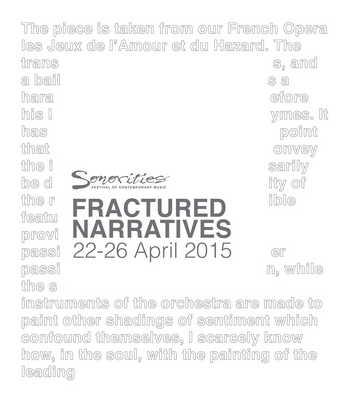 This year I had the opportunity to attend the symposium ‘Two Thousand and Fifteen’ exploring the theme ‘Fractured Narratives’ as part of ‘Sonorities’ a Festival of Contemporary Music in the Queen’s University Belfast. I presented a paper called ‘Improvising in the distance: Letters and Bridges’ focusing on the experience of Letters and Bridges telematic performance. 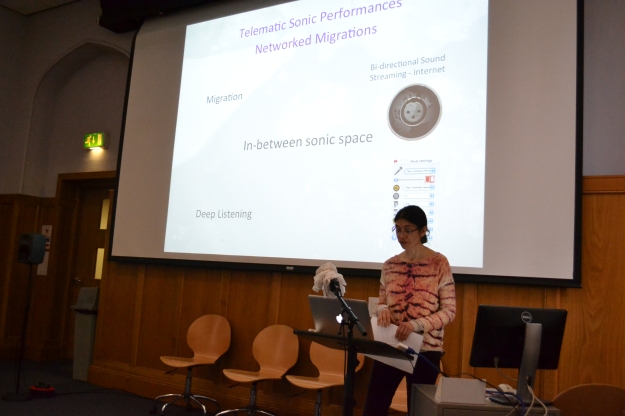 Here the abstract of the paper:

“This paper explores forms of fractured narratives that arose in ‘Letters and Bridges’, a telematic sonic performance from the project ‘Networked Migrations’. This event invited migrants (non-performers) based in Mexico City and in Leicester, England to share personal letters through improvisational readings, using real-time, bi-directional, streaming sound (Alarcon, 2014). Six participants from different countries, speaking in different languages, engaged in a practice of Deep Listening (Oliveros, 2005) to prepare for the improvisation, which was performed first by using a letter sent to them by someone they love, and later by using a new letter written to their distant performance partner in a pen-pal fashion.

Repetition, fragmentation, and transformation of words—leading to newly created relations between languages and styles, between authors and recipients, and between historical contexts—all helped participants to cross metaphorical ‘bridges’: bridges to access the memory of the beloved one, and bridges to access that ‘stranger’ who is willing to listen to multiple levels of personal story created in the distance. The bridge, in this context, can be understood as the path that facilitates the flow of feelings and words within the fracture that distance generates. This fracture implies: migration, dislocation, conversation between strangers, and stories from other spaces and times in foreign languages. Technology paradoxically enables and disrupts the narratives. The listening process and the detachment from visual presence focuses one on sound as the only source for interaction.

The paper will analyse the process lived by the participants—from the first pre-performance encounter to the public performance—as well as the new stories and reflections that emerged from the disruptive interaction: reflections about colonised and coloniser countries, witness accounts of sadness and violence, and the desire to migrate again, escaping from ‘broken’ and repetitive landscapes, which signified political instability and stagnant routine.”

The symposium invited me to think and hear the discussion about the role of participants in artistic/research projects, and subjectivities. I think each work must respond to the dynamics of the context and the people involved. There are not formulas either for art processes or for working with people, but always keeping in mind an ethical approach. The amazing book of Ruth Behar ‘The Vulnerable Observer‘ is a good reminder of the involvement we had with others in the creative and research process, an anthropological perspective.

Many thanks to the organisers! 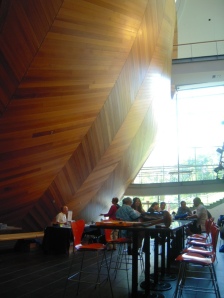 I had the opportunity and the pleasure to attend the first International Deep Listening Art/Science conference in Troy, NY, at the Experimental Media and Performance Arts Centre – EMPAC, organised by the Deep Listening Institute and the Rensselaer Polytechnic Institute.

It was an unusual conference, where people gathered to talk, but with the premise of listening deeply. I perceived this at all times, during the talks, performances, workshops and even during the lunch time. Previously I’ve heard and experienced in similar events that listening is demanding and therefore a tiring experience. After three days of continuous Deep Listening to lectures, workshops, performances, listening walks, poster sessions and round tables, I just wanted to listen more and more; I wanted an ever-lasting conference! I was fully energised, not exhausted (even in very high temperatures); this is because Deep Listening invites you to open not only your ears and intellect, but also your full body, to listen. As Pauline Oliveros stated in a round table discussion, listening is not about training the ears but about training the brain. When all sound flows through the body, because of our attentional dynamics, inner and outer perception combine in a delicious feeling which Pauline refers to as homeostasis, an equilibrium which is reached in the space/time continuum of sound, and creates the sensation of being inside of a musical piece that we customise as we listen, compose and perform; we are the music and the instrument for the music.

What was my music made of? It was made of every single paper and performance I heard, the workshops in which I participated, and the ‘sparks’ that these created in my stream of consciousness and knowledge. These ‘sparks’ were present in the anticipations and the surprises, in the non-thinking that occurs when I am performing guided by intuition, by listening, by flow. My own sounding materialised in my ‘Networked Migrations’ paper, and my participatory performance ‘Spider whispers’. The first one flew gently and used the right pace, as I felt listeners tuned into those in-between spaces (migratory and telematic), and into other unnamed spaces of sound. ‘Spider whispers’ was incredibly playful and sonically rewarding. I felt fear when I was standing in front of my audience/performers (I had never done this before, and never with so many people), but I said it, and we laughed and I felt we opened to the idea of becoming spiders, and connecting and bringing our own fears, love and laughter, our extreme fears, strange love and timid laughter that spiders provoke; we were connected.

There is a permanent feeling of gratitude when entering into a Deep Listening space; the flexibility and brilliance of space allows us to escape traditional boundaries of academic settings and protocols that could make us tense and tight. I was attracted to Ben Richter’s talk about Time Distortion, and his suggestion of Deep Listening as ‘a state’. I would say the Deep Listening state depends on each person’s ability to let go and simply listen. Removing all mental obstacles that constrain us to do so, and waiting for things to happen. In the conference, this ‘state’ was approached not only through artistic experiences but also through science. Seth Horowitz, in his keynote speech went deeply into the explanations of how our brain works for us to physically perceive sound, and he also acknowledged the mysteries that still remain in order for science to explain listening. While in the round table discussion, when the participants were discussing Hearing vs Listening, it was suggested that when hearing cannot be explained fully through our physical senses, such as in memories or listening in dreams, the temporality of sound disappears. This is when, I believe, we enter into a state of consciousness, as Richter also suggested, which can be accessed through Deep Listening. As we come into an amazing era of conscious awareness and world connectedness, dissolving all boundaries, including the ones between disciplines, Deep Listening is stimulating the expansion of listening in all kinds of educational, scientific and artistic practices all over the world. The conference gave me a wider breadth of my understanding of this philosophy and practice, and I am grateful to all organisers, presenters, performers and audiences for making possible this unusual event. Here is a link to the programme. I am looking forward to attending the second Deep Listening conference next year. Here an excerpt of ‘Wired for Sound’ by Jay Kreimer:

Wired for Sound by Jay Kreimer at the Deep Listening Conference, 2013 from Ximena Alarcón on Vimeo. 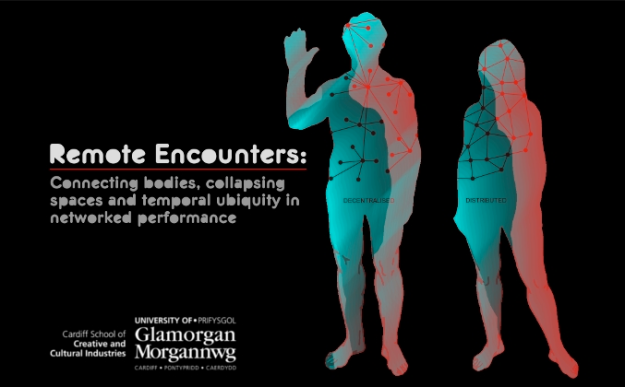 I experienced Remote Encounters in Cardiff; April 11th and 12th, 2013. A conference organised by the Cardiff School of Creative and Cultural Industries from the University of Glamorgan.

Escaping from the over-constructed city centre, on an early morning I go to find the bay.
I hold the torch of the World Harmony Peace statue, to connect with others’ wishes for peace in the world. I am connected with many people using no physical equipment. Holding the torch connects me.

The bodily sensations at that moment are triggered by external stimulus of the sense of touch; I was wondering about internal stimulus, like sound that comes into our bodies when we listen. I imitate the many sounds of the many seagulls; do they imitate my sound, their sound?
Sound is touching our bodies outside and inside. Our mind can scan the inner body, as can the food: internal touch.

At the conference, I noticed how deconstructing my work is the only way to present it. This is the manner in which it comes to life in many different ways. I am more comfortable with the realisation of this… Networked Migrations’ life.

There is a forthcoming publication of the papers and performances experienced at Remote Encounters, in ‘Liminalities: a Journal of performance studies‘!

Is the in-between space of the migratory context a sonic ‘field’? What is the field like that Networked Migrations performances such as ‘Letters and Bridges’ and ‘Migratory Dreams’ have created? How do you record it? These were some of the questions that I developed for a paper offered at the ‘In the Field’ International Symposium, which explored the art and craft of field recording and was organised by CRiSAP and the British Library (British Library Conference Centre, London, February 15th and 16th, 2013).

My participation in the panel ‘Collective, virtual and mediatised fields’ allowed me to explore the process lived by participants in the two performances, and raised my awareness of the layers of fields that were involved in each performance.

‘While the migratory condition pushes participants to search for a sense of belonging in the new or original location, sound improvisation through the Internet and with a Deep Listening approach, creates for them virtual alternative fields. When they share their feelings related to their migrations, through voice expression and pre-recorded sounds, new resonances seem to create spaces detached from physical locations.’

After two days of the symposium reviewing historical, multipurpose, and creative experiences of recording in the field, my proposal of these alternative fields increased in my mind as being relevant. The perception of the inhabited space through different practices and technologies that expand our listening experience help us to inhabit known and unknown territories as a whole and expansive field. It’s about listening to nature and the temporality of decay (Chris Watson), to rural environments through an intimate filter of wool touching our ears (Felicity Ford), human activity that is influenced by acoustic landmarks in a mixture of ecological preoccupation and poetical rendition (Peter Cusack); it’s about locating our body as a field, too (Davide Tidone), it’s about experiencing in about 50 seconds the squeezing of a built space suggesting a memory of catastrophe (David Velez), and it’s about voicing the experience with sound, embodying the field in our voice (Salomé Voegelin).

Looking at my notes from my panel, I see the technology field is crucial in this expansive field. The importance of ‘liveness’ via radio streaming (Udo Noll) makes me think of metaphors for the network: a landscape of consciousness, a real time that is shared time, a sort of augmented audio reality? Zoe Irvine makes us aware of the routes taken by flying audiotape, creating memorials of audio kept in place. And Francesca Pannetta invites us to know the technological developments that allow narratives built from organised layers of sound, from the soundtrack tradition, using maps in London. Reconstruction and deconstruction of sound space, and the volatile nature of sound in a field, is a key point that this panel has left in my memory.

Grateful for this opportunity to listen, share and find connections.

Participating in ‘In the Field’ International Symposium